From The Repopulation Wiki
Jump to: navigation, search

We wanted to highlight one of the new additions added to the crafting system in December, the crafting attribute system. Though briefly mentioned in our change notes and on the forums, the attribute system was a fairly major modification in the crafting process. The exciting part about it is that the attribute system further impacts the customization of your character's equipment. Before we start to walk through the system, it might be important to do a quick run over how our system works for those who might not be familiar with it.

As many of you might be aware, The Repopulation has no levels. Instead we offer over 70 independent skills. For Trade Skills we offer a mix of resource collection and crafting skills that intertwine. In addition, some crafting lines include collection skills. The trade skills also include skills for creating fittings which are like sockets, stems which are like boosters, traps, robotics, vehicles, and so much more.

Without levels, we have no artificial restrictions placed on crafting by other aspects of the game (such as needing to be level 30 to craft something even if your crafting skill is high enough). Naturally, you cannot create the biggest and best stuff early on. You will need to hone your skills over time. If you want to make a name for yourself as a crafter in The Repopulation you will be able to do so without other barriers restricting you.

We have a rather distinct configuration for our equipment using what we call "shells" and "fittings". The armor, handguns, rifles, and swords are simply basic shells that have basic stats. Weapons all have base stats and different uses such as automatic weapons are best against lightly armored foes where sniper rifles and heavy impact weapons do the most damage against heavily armored foes. However, there can be multiple visual representations of this rifle or that piece of armor, which have the same core stats. This lets you choose your equipment based on a certain look and then you can customize the armor to match your play style. 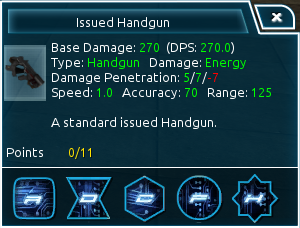 Each piece of equipment holds a specific amount of modifications slots that we call fittings. These modification slots are similar to a socket system where you can place certain types of fittings in an item based on their major attribute types. The fittings have a letter label ("A", "C", "E") and based on the label, their attribute type will make them modify damage resistance, accuracy, energy regen, and other stats associated with a shell. This lets you modify the base shell of your armor however you see fit without having to choose specific weapons or armor because of their stats.

Now that we have taken that minor detour lets look at the new change we implemented, the attribute system. Our crafting system already featured a flexible recipe component system where putting different parts into the recipe produces different results. We also have a quality/grade system to differentiate the results of beginning crafters and experienced crafters. We wanted to add a bit more flexibility to the system by allowing more control over some of the stats associated with the fittings. To overcome that hurdle we introduced the attribute system.

Each resource in the game used for fittings has primary stats that are directly associated to that resource in some fashion such as Physical Resistance, Accuracy and so on. These resource attributes are not randomly assigned. Each material has multiple attributes that are assigned into 3 categories: Primary, Secondary, Tertiary. Primary attributes have the highest values (typically 7-10) with secondary in the middle (4-6) and tertiary at the bottom (1-3). These values are static so a chunk of calibrite will always have the same attributes, but it can have a random grade value associated with it that impacts the rarity and significant worth of the material (grade A being the best).

The next step in the process is refining the material. Calibrite ores' primary attribute is Physical Resistance, there is no other ore that can provide as high a bonus to Physical Resistance as Calibrite. As part of the crafting process, refinement requires the player to take the harvested ore and create a refined metal bar. Based on the agents players use in the recipe, they get to choose which attributes are on the final product. With more than ten attributes available on each ore, players must decide which ones are most important to them as they create the refined metal. The refinement system does not only use pure ores, but allows for combinations of ores and minerals to create alloys which have unique attributes of their own. The refined results are then used by another craftsman (or if you are skilled enough) in another recipe to create a fitting with the refined materials. 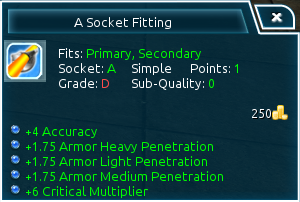 As mentioned with fitting there a letter classifications for fittings such as "A" or "C" or "E". These are typically comprised of primary, secondary, and tertiary stats much like the materials such as calibrite. "A" class fittings primary consist of the core combat attributes dealing with damage increase and mitigation across the different damage types (physical, energy, fire, etc) and have secondary and tertiary stats that are more limited in value. "C" class fittings deal with recovery/retention style stats for health, energy, momentum, and endurance and might include some secondary and tertiary stats available in "A" class fittings. Across the spectrum, players can add multiple stats and make detailed choices about customization, but the system is tailored to prevent people from stacking full damage on everything and creating an excessively unbalanced weapon or piece of armor because each fitting has a limit of each attribute that can be placed on it from the refined metal used to create it. The crafted fitting takes the attributes passed to it by the refined metal and its grade to spit out the stats. When the fitting is slotted in a weapon or piece of armor equipped to a character, those stats are added to the character or used by the weapon or armor when used. 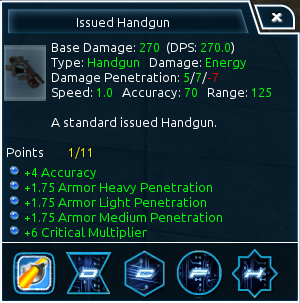 One of our goals is to create a fairly complex crafting system. Our economy and ecosystem are designed around the idea that there will be no moderate to high end fitting drops, facilitating a fully player driven world. We feel this will provide a diverse crafting experience, offering both a quick learning process and the complexity of refinement and producing sought after end products along with a high level of customization that will satisfy players of all backgrounds.

We hope you enjoyed this deep dive into the crafting attribute system. We look forward to doing more of these in the coming months and soon you will be able to get your hands dirty experiencing it for yourself.